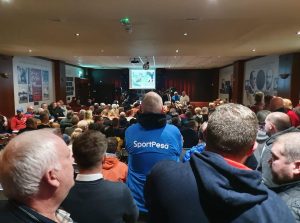 There were many topics of discussion including the betrayal act, the Union and the upcoming elections being paramount. It was extremely positive and reminiscent of the Ulster Says No mass protest campaign against the provisions of the 1985 Anglo-Irish Agreement.

Something notable was the many men and women from all backgrounds standing side by side, United, pushing an uncompromising message of a people backed into a corner with little or no choice but resistance.

There has been various gatherings of frustrated PUL communities including East Belfast, West Belfast, Newtownards and Conlig. Other upcoming meetings include Antrim on Wednesday 6th November and South Belfast on the same date.

We have also seen various Resist the Betrayal act banners erected across the country.

The upcoming General Election is no doubt one of the most important our beautiful country has seen in some time. Will you stand and be counted?

We cannot be the generation that fails Ulster.