Yesterday evening in the Skainos Centre, Belfast our group in conjunction with REACH hosted an evening challenging the idea that Ulster-Scots has a sectarian subtext and that it does not have cross community potential by pointing to evidence in several literary and autobiographical texts that have not received sufficient critical attention. 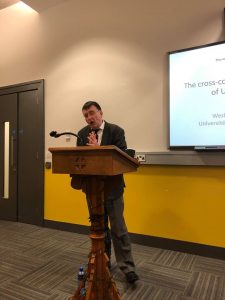 The meeting was organised following the release of the “NEW DECADE – NEW APPROACH” deal of which it states in section 27/c : “ to enhance and develop the language, arts and literature associated with the Ulster Scots / Ulster British Tradition “

The evening was opened and closed with two beautiful Ulster Scots songs performed by Caoimhe, a BBC radio presenter and singer.
It was followed by a talk by Professor Emeritus Wesley Hutchinson whom we have hosted on many occasion.

Wesley is the Honorary President of Europe’s largest Irish Affairs body, the Societe Francaise d’Etude Irlandaise. He is also the senior academic of Irish affairs at the world renowned Sorbonne Nouvelle University in Paris.

His global perspective on minority languages was most helpful in celebrating culture without allowing it to be used as a political weapon.

His most recent book, Tracing the Ulster-Scots Imagination, was published by Ulster University last year with the support of the Reconciliation Fund of the Department of Foreign Affairs and Trade and Pretani Associates. This was the first major study of the Ulster-Scots literary and historiographical tradition across the centuries. Wesley Hutchinson lectures regularly on Ulster-Scots topics, for example at the University of Strasbourg, the Tower Museum, Derry/Londonderry and the Discover Ulster-Scots Centre, Belfast.

Everyone in attendance received a copy of The Country Rhymes by James Orr and a copy of an Ulster Scots translated poster by Dr Ian Adamson made for Cara Friend relating to bullying, suicide awareness, safe school space.

Many thanks to Minister Brian Anderson of the East Belfast Mission for hosting us.