Return to Our Experiences

Yesterday, 26th May 2016, the groups chairperson and patron Dr Ian Adamson attended a Ceremonial event marking the deaths of British Soldiers during the failed Easter Rising at Grangegorman Military Cemetery. 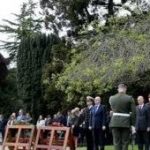 As many as 125 soldiers of the British Armed Forces died during this period.

Each soldier that died was a unique individual – a son, a brother, a husband, a father, a sweetheart, a friend. Each of these lives mattered, and their memory matters today.